Instagram has recently introduced private like counts for a minority of users globally. Speaking at the Wired 25 event in San Fransisco, Instagram CEO Adam Mosseri confirmed he believes users will now have to decide for themselves if a post is worth liking rather than judging by its popularity. This is to help users share what they want to share, as opposed to posting to impress others through the amount of likes they receive.

Although this feature only recently took the media by storm after hitting the US, Instagram has actually been hiding likes since April in Canada. It has since then introduced the test in Australia, Japan, Ireland, Brazil, Italy and New Zealand. The features allows users to see how many likes their personal posts receive but this cannot be viewed by their followers. Instagram recently took to Twitter stating that the feedback so far has been positive, but its continuing to test because its such a fundamental change to the app. 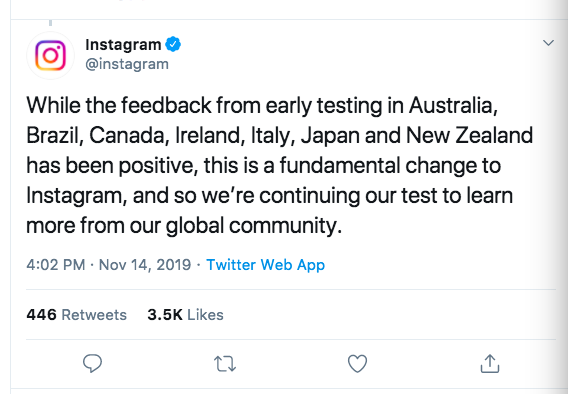 Instagram have alway’s wanted their app to have a positive impact on the way people express themselves. This feature will allows users to focus more on sharing more unconventional and artsy posts regardless of its like count and public recognition. This meets Instagram’s target of making the app more diverse and aesthetically pleasing.

Although users can still see who likes their own posts, a huge concern with the expansion of this feature is the damage it could cause to creators and influencers across the platform. Likes are extremely important both roles as it helps show competition and potential partners their engagements and popularity on the platform.

A recent study by HypeAuditor discovered that many influencers and creators lost 3% to 15% of their likes in countries where Instagram introduced this feature.

Instagram are actively working on ways to provide everyone with a positive outlook on the new feature including both influencers and creators. As like counts won’t be public, influencer marketing agencies will now have to rely on self-reported screenshots from creators showing the amount of likes they receive on their page. Of course this is an issue as creators can alter these screenshots through photoshop in order to increase their image and like count. This means agencies won’t be able to verify the engagement stats are true and will not be able to give a payment. Businesses will now feel less obliged to build engagement on their platform and increase popularity. This, in the long term will benefit Instagram directly as spends which initially entered the pockets of creators will now go toward official Instagram ads, in return earning the company more money.